I naively thought that getting the Eurostar was similar to getting any other train: that we’d show up about 10 minutes before it left the station and be on our merry way. Reader: this was not the case. It, very sensibly, turns out that Eurostar is more akin to any other form of international travel, where you need to show up at least an hour in advance to go through security, have your bags checked, and wait around 20-30 minutes in order to actually board. And that’s why I ended up getting up at 4:30 in the morning before my trip to Belgium.

It was my first (and, at the time of publishing, only) trip away with George, my boyfriend. While the holiday spirit might have hit him from the moment we crawled out of bed, it was something that took me the approximate time of train-ing from London St Pancras to Lyon, en route to Brussels. Finally, as we drew closer to Belgium, I deemed myself awake enough to go to the toilets and put on some makeup. 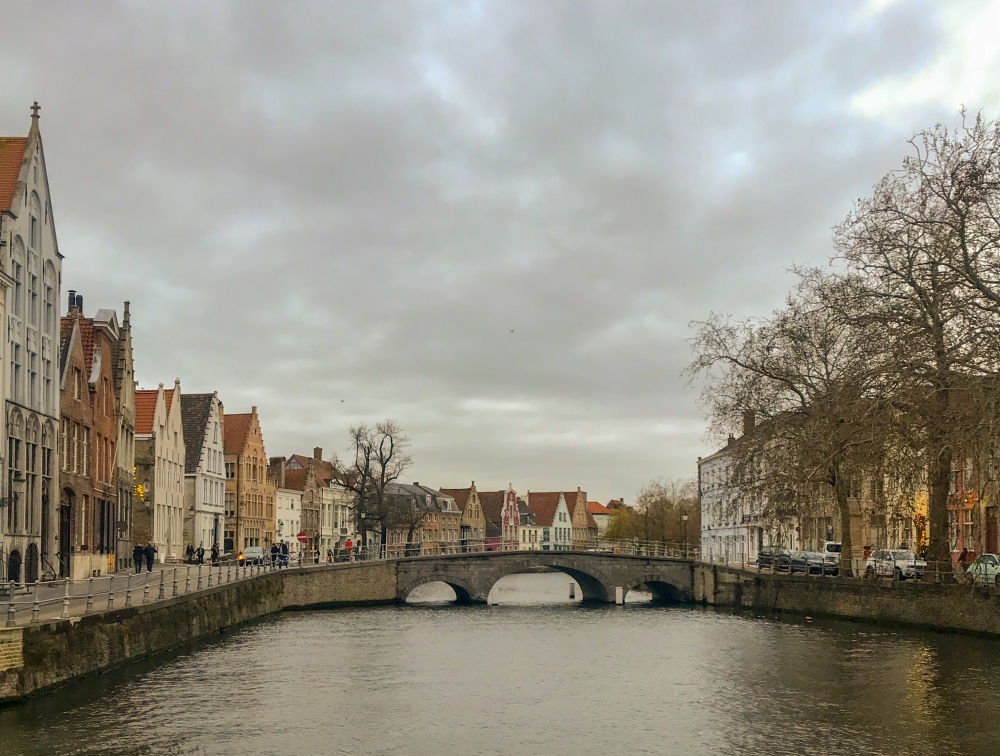 Our trip lasted from Thursday morning until Monday evening, and in that time we covered Bruges, Ghent, and Brussels.

First up was Bruges, which looked like something out of an Enid Blyton story or the front of an old fashioned chocolate box. The streets were cobbled, there were horses lazing around on the roads and the time of year made it all the more special. We checked into our hotel and met our landlady – the daughter of the original owner. She showed us to our room and gave us discount codes for some of the local restaurants. After a quick shower and a change of clothes (and adding an extra layer of warmth in preparation for the coldness ahead) we ventured out to the nearby restaurant which held the promise of a free glass of champagne.

The first issue (if I can call it that) we stumbled upon in Bruges was that neither of us could speak Flemish, or the special dialect spoken in the area. So, we sat down for lunch and ordered a glass of wine and a beer and accepted our free glass of champagne. Shortly after, we were a little drunk but had no idea how to order any food. A slightly delayed and very obvious Google Translate mission later, I settled for the ‘special’ – beef stew with croquettes, carrots and…pears. Everything was delicious (although quite expensive) but did the job of sobering us up after multiple drinks.

Next up, it was time to explore the centre! Our trip to Bruges was picked fairly spontaneously and the trigger point was probably the cheap Eurostar tickets we found. So it was fair to say that we probably didn’t do that much research before we ventured across the pond. But Bruges was…delightful. We wandered around the Belfry, through the Christmas markets and into the Church of Our Lady Bruges. We drank gluhwein and ate waffles and bratwurst and walked until our knees hurt. The centre of Bruges is so small that it’s easy to walk from one side to the other in about half an hour. So when we worried that we wouldn’t make it to dinner without leaving some time to get back to the hotel and get changed, we burst out laughing at Google Maps’ estimation of a seven minute walk.

But before dinner, we went to Choco Story. Technically it’s the ‘coffee’ shop that pairs with the chocolate museum, but we did the two in reverse order. Choco Story was incredible. Unsurprisingly, everything was chocolate-themed, from the food to the drinks and the beer. The entire shop is decorated in Aztec and Mayan and African decor with huge jungle animals staring out from the walls. It was amazing. I didn’t actually take any photos because I was in such a chocolate coma by the end.

The mistake we maybe made here was overindulgence: Belgium as a country is quite expensive and, somehow, it was cheaper to order an entire fondue than it was to order two chocolate waffles. So we went for the fondue, and gorged ourselves silly on chocolate coated fruit, marshmallows and biscuits. We walked out feeling rather sick and even slightly lightheaded. But no regrets.

The only thing we could think to do after this was take a very slow wander back to our hotel, where we promptly collapsed and fell asleep for an hour or two. Then, we wandered back out, ever so slightly less full, and explored the Christmas markets some more. It was important to walk as much as we could before dinner, which George had booked in advance. By no means the most traditional restaurant, we ended our first night in Bruges feasting at Ribs ‘n’ Beer. For around €20, you get bottomless ribs as well as potato wedges and coleslaw. I made the mistake of eating all of my wedges and could only (…only!) manage 1.5 racks of ribs. They were utterly delicious and I’d definitely recommend a visit there for some not too authentic but certainly amazing food. We rounded off the day by, very excitedly, going straight to bed.

Day two was spent Being Cultural. We started the day with breakfast at “That’s Toast!” a small cafe that we stumbled upon, which served the best breakfast ever. It was so good, in fact, that we went there two mornings running and had the exact same breakfasts both times. A quick Google tells me that it’s somehow the second best restaurant in Bruges, and I’d be hesitant to disagree. We both had a variation of avocado and smoked salmon on toast with things like capers, radishes and balsamic glaze on top. Mmmmm.

We started our day by visiting the wholly-unpronounceable Sint-Salvatorskathedraal. Bruges’ cathedral was beautiful and I looked around at all the stained glass windows and then waited patiently as George wandered through and read everything in great detail.

Next up was the Belfry tower, otherwise known as the focal point for the film,”In Bruges”. The belfry tower is over 83 metres tall and there are 366 steps taking you to the top. It wasn’t actually as difficult as I envisioned, but the mini pit stops up to the top definitely helped. The views were amazing and we took plenty of pictures, both of the surrounding sights and ourselves at the top of the tower.

After working up a sweat it seemed only fair to enjoy some more of Bruges’ delights: huge, soft rolls filled with roasting hot sausages and ketchup, followed by a wander around the Chocolate museum. While the history part was fairly interesting, the highlight for me was the copious amount of free samples dotted around each individual floor. I left, once again, feeling slightly sick.

From the chocolate museum, we went to the beer museum (my vice and then George’s vice, you see). I don’t like beer and beer also doesn’t like me but the museum itself was really interesting. The interactive quiz kept me entertained while George read up on the history of beer and everything else you could ever need to know. We finished by heading down to the beer cafe where I tentatively sipped the fruitiest beer on offer and George sampled a range of fancy-named bottles that I can neither remember nor name.

The second evening was hilariously badly organised. We were recommended a restaurant by our hotel lady and Googled it before we left. While the food was supposed to be good, TripAdvisor told us that the restaurant staff were known for being offensive, rude and sometimes even downright racist. The place looked beautiful and very traditional from the outside but we decided to cancel our reservation and head elsewhere. However – Bruges being a popular town and it being a Saturday night – it was very difficult to find somewhere to go. Eventually, we found an incredible Spanish tapas restaurant called Quatre Mains and ate everything. We got the sharing menu and ate seafood, meat, mini burgers and more. Everything was delicious and we promised ourselves we’d leave the best TripAdvisor view ever…and completely forgot (note to self: do this).

On our third morning, we wandered around the canals, bought some souvenirs and headed back to the train station to head on to Ghent. Check back soon for part two: Ghent!