Follow on WordPress.com
Posted on April 30, 2019 by Georgie Darling

Before we begin, let’s get something straight: 48 hours will never be enough time to explore the beauty of Barcelona, even if you spent the entirety of those 48 hours wide awake. But, if that’s all you’ve got – and for the sake of this article you have not even a minute more – then we better do our best to maximise those two days!

Maybe you’re reading this guide because you want to squeeze a visit to Barcelona into 48 hours and soak up the spirit of the city in just that time. Or maybe you’ve been here before but you want to rediscover the city. Realistically, even if you spent your whole life in Barcelona, you’d probably still stumble upon new things and there’s always more to be discovered. 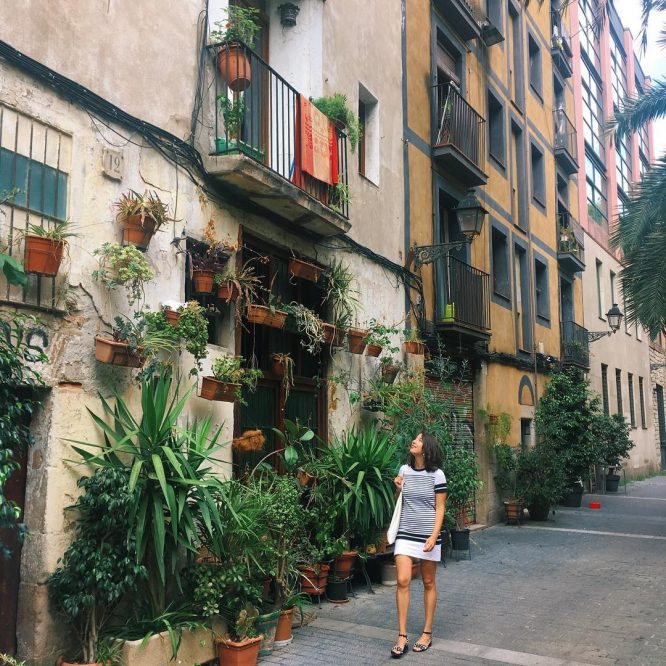 The Gothic Quarter (old town) is your best bet if you want to be central and never more than a stone’s throw from a tapas bar. You’ll be a 10ish minute walk to the gorgeous views of the harbour and a five minute walk to La Rambla, which makes it our top recommendation for accommodation. Colón Hotel Barcelona is popular for its dazzling views of the cathedral, or The Moods Catedral Hostal Boutique is a slightly cheaper option with minimalistic but modern decor. It goes without saying that Barcelona is full of excellent hostels (Sant Jordi Hostels – Rock Palace and Casa Gracia Barcelona Hostel are two great options) or Airbnb is also widely available, although it must be said that the locals aren’t a fan.

First things first: everyone needs fuel to get going in the morning. And where better to begin our first day than in the centre? Head to Plaza Catalunya to visit Luzia for breakfast. Luzia (carrer del Pintor Fortuny, 1) is a restaurant of the Tragaluz group that offers sandwiches of all kinds, although the must-have meal here is yogurt with homemade granola. If you’re feeling thirsty, make sure to sample the 100% organic juices. If there’s one thing that Barcelona is known for, it’s the vibrant cultural atmosphere that encompasses the city. And since we started in the centre, we’ll visit some of the most important museums in the city.

But before that, we’ll give you a whistlestop tour of the other spots we’ll be checking out. We’ll pass through La Rambla (with a pit stop in the Boquería) and we’ll also pay a visit to a secret garden (because we wouldn’t live up to our name otherwise, would we?) Then we’ll go on to the Centre de Cultura Contemporània de Barcelona – on the way you’ll inevitably stop at one of the second-hand shops on Calle Tallers – where there’s always an expo, festival or talk that’s worthwhile. The Barcelona Museum of Contemporary Art is contiguous with the CCCB and if you’re a fan of contemporary art, it’s definitely worth stopping by to enjoy some of Basquiat’s art or one of the other incredible exhibitions. Day 1: Where and what to eat

As cities go, Barcelona is pretty walkable but also pretty large. So take advantage of the fact that you’re in the centre already and visit Raval for a spot of lunch. El Raval, also known as Barrio Chino, is a distinctly multicultural neighborhood. And this multiculturality filters into every corner: you’ll see it in the range of shops, in the faces of the passers-by, in the small groups of skaters hanging out on the streets.

In view of the fact that Barcelona is not cheap (although that doesn’t mean to say that you won’t find some cheap eats dotted around), we recommend you pay a visit to Spaghetti A La Guitarra (carrer de la Leialtat, 4): a place where everything on the menu is delicious. Tucked away and off of the main street, you’ll find that prices are slightly cheaper here. And, of course, it’s a bit of variety from all of the tapas that you’ve (hopefully) been stuffing your face with! Now you’ve recovered your strength with a hefty dose of Barcelona’s finest pasta, avoid falling asleep with a good walk. A favourite for tourists and locals alike is Park Güell, which will take you around an hour’s walk, depending on the pace you take. After your spaghetti lunch and the blazing sunshine, we’ll forgive you if it takes slightly longer. The local area, L’Eixample, is a neighborhood to walk around where you’ll struggle not to let your jaw drop with the beautiful surroundings. Make sure to make a stop at El Nacional (Passeig de Gràcia, 24) to have a coffee before you go and visit Park Güell, one of Gaudí’s most recognized works.

Once you’ve watched the sunset from Park Güell and you’ve run out of storage space on your phone for the amount of photos you’ve taken (it’s inevitable, trust us), it’s time to go down to Gràcia. Gràcia is technically still Barcelona but any local will tell you that it’s not really Barcelona. It’s like a micro-city (it was a village) within a city.

As you’d expect from a city (even a micro one), the gastronomic options it offers are quite varied. If you go with the budget of a Russian oligarch or fancy treating yo’self, go to the Botafumeiro (Gran de Gràcia, 81) and feast upon some of the freshest seafood in the city. For a cheaper option, eat a piadina in the Plaza del Sol with a few beers in the street. Other options include the Pepa Tomato (Plaça Revolució de Setembre 1868, 17) and the Gula Bar (carrer del Dr. Rizal, 20). For a cheap but truly delicious burger, head to Bacoa for crisp, rosemary salted fries and a perfectly cooked burger with any number of toppings. It really depends on what you’re looking for from an evening in Barcelona. The most typical club recommendation you’ll find will likely be a suggestion to go to Razzmatazz, where you’ll find a typical club atmosphere and music to match. However, if you’re looking for something a little more niche, head to Nitsa. If I worked in the Nitsa marketing team, my job would be the easiest in the world. Recommendations like “A spectacular room where dreams take their own form”, “Together with Berghain, the best club in Europe”, “The most legendary club in Barcelona, without a doubt” keep tourists and locals coming back again and again for a huge range of DJs.

Apolo (carrer Nou de la Rambla, 113) is another classic and its walls breathe living history. To get from Gràcia, the best option is a taxi, although if you’re looking to travel on the cheap, take the metro. We could have been nice and given you the option of brunch instead of the breakfast to allow you to sleep off your hangover from the previous day but, quick reminder: you’ve only got 48 hours in Barcelona, so have a quick shower, rub your eyes and head out for day two.

In Barcelona there are no coffee shops (well, a Galician would say there are a few), but instead there are farms. And what better option is there than Petitbo Farm (Passeig Sant Joan, 82) to hopefully relieve that headache? We said no to brunch, but it’s still an option here if you insist (and it’s delicious). Have breakfast and get prepared for another jam-packed day of adventuring around the city. Every corner and every building in Barcelona is a small capsule of history. And going down from Petitbo towards the beach you can check it out. First up is the Arc del Triomf: the gateway to the 1888 Exhibition. If you go downhill, you’ll find Ciutadella: one of the most spectacular urban parks in Spain that has a dense and sad history.

After leaving the Ciutadella, you’ll want to walk towards Barceloneta beach – a strip filled with people rollerskating, jogging and relaxing. And, of course, the beautiful waves and pale sand that make Barceloneta one of the city’s best (albeit busiest) beaches. Check out the huge, imposing Hotel W to grab that tourist-y shot that everyone seems to do around here. It’s a common but unfortunate thing that pretty much all the beaches of the world are a black hole when it comes to food (unless you fancy some charred corn-on-the-cob) and are a generator of hunger. That’s why we’ll go in the direction of Poblenou, one of Barcelona’s trendy neighborhoods.

There are clubs, coworking spaces, life-long bars, a few supermarkets, some factories, and plenty of gastronomic offers to consider. Poblenou has slowly turned into a hipster district but is still probably one of the last few ‘alternative’ areas of Barcelona.

Day 2: Time for some modernism

If we say that Barcelona is the city (among many things) of modernism, it’s not said in vain. Obviously the greatest exponent of this movement is Gaudí and spending 48 hours in Barcelona without seeing any of his works is grounds for expulsion. You’ve already been to Park Güell, but it’s time to choose between three of his great works: Casa Batlló, Sagrada Familia or La Pedrera. We’ll leave the choice at your discretion (although we warn you, you’ll have to decide in advance because tickets sell out quickly). In order to save time, take the bus, Metro or taxi rather than trekking across the city.

Surely (hopefully) by now, your hangover has been moderately overcome and the bump of modernism has given you the strength to keep doing things. So it’s time to go to Montjuïc, one of the highest areas of the city. Montjuïc’s magic can be seen from far away and it only gets better as you walk closer: the MNAC (outside or inside, depending on how much time you have) offers an incredible panoramic view, and then there’s the tranquility of the communications tower area, the botanical garden… we could keep going. As dinner is the last activity you have left, we’ll give you some breathing room to decide exactly what you want to try. If you haven’t had a chance to sample some tapas yet (we’ve been assuming that you’ve done so throughout your mini-trip) then we’d recommend digging in as a final reminder of the city. Although, of course, the options are almost endless. And if you’re willing to spend money, Barcelona is the Spanish city with the most Michelin Stars. So if you’re willing to go all out, you certainly won’t be leaving hungry. Ready to book your flights yet? If you’re looking for any further tips or inside knowledge, check out Barcelona Secreta.

This article was originally published at Secret London.

2 thoughts on “How To Spend 48 Hours In Barcelona”