Welcome to the city that never sleeps! Spoiler alert: neither will you.

…only joking, you’ll get some rest. For those looking to experience NYC to the fullest, you’ve come to the right place. I’ve put together an itinerary of all the places you can’t leave without seeing. This guide takes you to some local spots in addition to all the tourist must-do’s. You’ll definitely want to bring comfortable shoes because this is a pedestrian city—which means there will be a lot of walking. Since you’re only here for two days we have much to cover, so let’s get going!

Note: Buy your tickets to a Broadway show and Top of the Rock before your visit along with making any lunch and dinner reservations. If you wait until you arrive you may end up spending more time in lines than actually seeing the city. 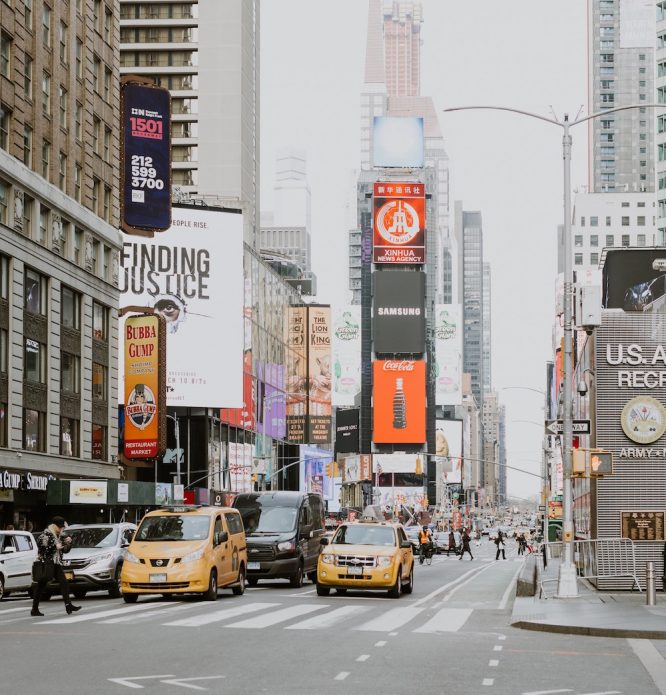 If we’re to get everything done on this list you’ll want to stay in Midtown. While there are various hotels you’ll recognize (Westin, Hilton, and Marriott) we’d recommend staying somewhere like the Radio City Apartments, or if you’re willing to splurge on luxury, The Towers at Lotte New York Palace.The two hotels are equidistant from the Rockefeller Center, and a perfect location for first-time visitors.

How to get around

There a many subway lines tracing the streets from underground, and they can be incredibly confusing if you’re not used to riding them. On your first ride you’ll need to get a MetroCard from one of the machines near the turnstiles against the walls. Since you’ll only be here for two days and each ride is $2.75, we recommend starting with $15 on your card. That should be enough to get you around, but if you end up needing to add more it’s worth noting that you can actually add an exact amount to your card (which is great if you don’t want to leave town with a balance on your MetroCard).

Since you’re staying in Midtown, you should start off Day 1 by exploring and crossing off some easy sightings from your list. Spend a couple of hours strolling around the area, beginning with Times Square. Walk past where they film Good Morning America, and do some light shopping if you’d like. As you walk down make your way over to Bryant Park and the New York Public Library; it’s a beautiful place to stop and absorb where you are before continuing your journey north toward Radio City Music Hall and Rockefeller Center. Once you get to Radio City Music Hall’s bright neon lights and take your obligatory photos, pop into Magnolia Bakery across the street for their famous banana pudding (and even if you aren’t hungry, you can’t leave the city without trying it!).

Turn the corner to Rockefeller Center and once you’re there you’ll likely want to do Top of the Rock for the stunning views you’ll see from the building’s open-air roof deck on the 70th floor. It takes about an hour to do, and you’ll be able to see much of the city from the top including the Empire State Building. 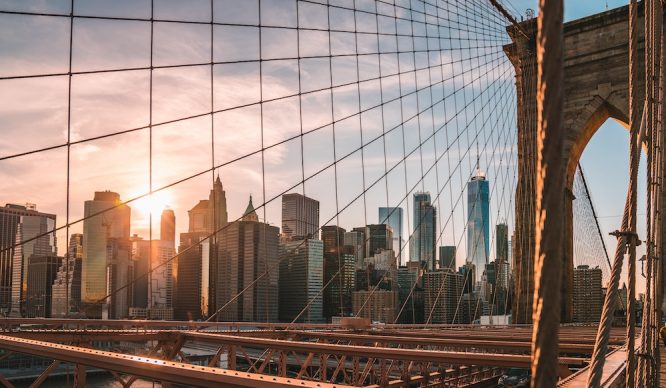 Once you’ve finished your time at the Top of the Rock it’s time to walk over to Grand Central, it should take about 10 minutes and once you’re there you can either grab lunch in their food court-style downstairs area, or the iconic Grand Central Oyster Bar & Restaurant…which is where we suggest because you’re only here for 48 hours so live a little! And you never know, maybe you’ll find a pearl in your oyster there too as one gentleman did over the holidays.

Since you’ll technically already be in the station, go down to the subway level and take the 4/5 line uptown to 86th Street (or the 6 line to 77th Street). From here, walk east until you reach Central Park and then down (or up) to 82nd Street, we’re going to the Metropolitan Museum of Art! Explore at your own pace and let the art be your guide around the various rooms. However, if you want a clear map of everything they certainly offer those, along with an app you can download on your phone for convenience. Not everyone is aware of this, but the Met has a lovely rooftop garden bar as well that’s open during warmer months and another great spot for gorgeous city and park views. Be careful not to get lost in the massive museum. It can take you days to fully explore every part of it, but unfortunately we don’t have that kind of time.

The day is still young! When you finish up at the Met, if it’s not too dark out yet, make your way to 79th Street and walk across the park to the west side for dinner at Sarabeth’s Upper West Side. If you’re feeling a bit drained and want to give your feet a rest, feel free to take the M79 bus crosstown to West 79 Street and Amsterdam Avenue. As mentioned before, you’ll want to make a reservation before going, but if you didn’t have a chance to it’s not a problem. There are two other restaurants nearby you can try (Crave Fishbar and Momoya)  if the wait at Sarabeth’s is too long. After dinner, if you’re feeling a bit more energized with food in your system, hop on the 1 line at Broadway and 79th Street downtown to Times Square for the final stop of the day: Dear Irving on Hudson. This new bar is an expansion of the popular spot in Gramercy called Dear Irving, except with spectacular views from the 40th floor and a James Bond-themed atmosphere.

After some cocktails it’s time to go back to the hotel and rest up because another jam-packed day awaits!

Wake up early, it’s time to have some famous New York bagel and lox! Take the 1/2 line to 23rd Street and walk over to Murray’s Bagels in Chelsea. Known as one of the best bagel shops in the city since its opening in 1966, you should definitely try the bagel and lox here: everything bagel, salmon lox, onion, tomato, and capers. If you’re not into lox though, any choice you make will be just as good because the bagel itself is amazing (and that’s due to New York’s water).

Now that you’ve had the chance to indulge in one of the best bagels in the city, you can walk it off on the High Line nearby. The High Line extends north to the brand new area called Hudson Yards, and south to Chelsea Market. For time’s sake here, however, we’ll walk down to Chelsea Market.

Soak in the gorgeous views from 1.5-mile elevated park that was once a New York Central Railroad spur, and when you find yourself near 16th Street look for stairs leading to the street level. Here you’ll find the warehouse-looking building that is Chelsea Market. Chelsea Market is a hotspot for both locals and tourists alike. They recently opened a second floor for locals to do their grocery shopping, but it’s also a go-to lunch spot with great food vendors like Los Tacos No.1, the cheesy “mozz bombs”(mozzarella balls filled with pesto), and Very Fresh Noodles where you can watch them handpull the noodles right in front of you. Plus it’s also home to one of our favorite brownie spots, Fat Witch Bakery.

If you want to eat at Chelsea Market go for it, but if you’re not hungry just yet it’s time to work up that appetite on the subway. Get your MetroCard ready, because we’re heading downtown to another famous NYC hotspot: Joe’s Pizza.

Take the A line down to West 4th, which will leave you at Washington Square Park. However, before walking over to the park, stop inside Joe’s Pizza for a New York slice. While you’re there take a look at all of the celebrities that have visited which are displayed all over the shop’s walls; you couldn’t miss them if you tried.

Now, prepare to walk a lot. From Joe’s Pizza walk over to Washington Square Park’s arch for some more photos. You’ll be able to see the Empire State Building in the background, too! When you’ve finished walking through the park walk south into the SoHo area which is south of Houston. We’re on our way to the 9/11 Memorial but we’re taking a detour through SoHo, Little Italy, and Chinatown.

From Chinatown hop on the R/W line at Canal Street and Broadway two stops to Cortlandt Street Station and walk over to the 9/11 Memorial. When you get to the area you’ll see the large white structure called the Oculus (which also has a station inside) but before checking that out make sure to spend some time at the reflecting pools. Appreciate the moment and the somber fact that you are currently standing at ground zero. If you’d like to spend the rest of your day doing the 9/11 Tribute Museum be sure to bring some tissues with you.

Otherwise, after spending time at the Memorial, and walking through the 9/11 Memorial Glade—which just opened in honor of the thousands of people who have died of related illnesses due to the September 11 recovery efforts—step inside the Oculus Transportation Hub. It’s time for a Broadway show.

You likely won’t have time for a full sit-down meal, but if you do, make a reservation at the Italian restaurant Bond 45 or the new ramen spot in the area, Ichiran. As for the show itself, take a look here for tickets to Broadway shows like Dear Evan Hansen, Mean Girls, The Book of Mormon, and Avenue Q among many others.

After the show, if you’re still up for a bit more fun in the big apple, take the train down  to 34th Street, Herald Square. Walk around the area and don’t forget to look up at the Empire State Building. Every hour on the hour the top of it sparkles with white lights. Once you’re done watching (which you may want to do from some distance so you can actually see the top) grab a drink at one of the bars or speakeasies nearby. A few of our recommendations include Patent Pending speakeasy, Oscar Wilde, and the Flatiron Room.

You’ll definitely feel sore and exhausted after these 48 hours, especially if it’s your first time in NYC, but it’ll be well worth it! If you end up spending a bit more time in the city be sure to check out SecretNYC for more recommendations.